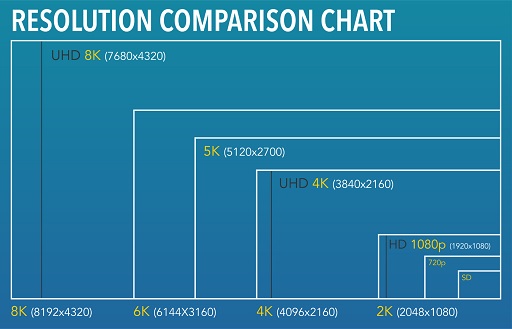 OK, where was I? Oh yes, the need of 8K. Why I thought about this question, aren’t there enough pages across the whole web talking about the fact we DO need 8K OR that we DO NOT need it?

Indeed… still, I asked it by myself few days ago, when I was in a shop and I noticed a lot of (relatively) cheap 8K TV sets for sale; I mean, a 75″ 8K for about 1700€ can’t be so bad, right? Ehr… first of all it was an LG, hence IPS, and I’d not spend my money on such kind of panel – sorry LG! Well, there were some Samsungs 75″ starting from 2400€, not as cheap as previous models, but hey, these are VA… still, they are suffering from pixel dithering, hence not “true” 8K display! I guess other producer’s models could be VA and “true” 8K, but the prices are even higher.

But c’mon, 8K > 4K, so it should be better! Well, according to the marketing departments, they are, and you need to get one now! Problem is, I don’t trust marketing tricks since, what? ever? It’s not (only) about price, but because several other reasons I’m going to list.

There are next to nothing 8K material!

Apart few demos on Youtube, and a Japanese TV channel, today there are no other sources with a true 8K definition. Someone can argue that few years ago, there were no 4K, I mean UHD 4K, material, but soon there were an optical disc format, streaming, television broadcasts. Right. But it was accompanied not only by the resolution increase, but also by the wide color gamut and high dynamic range – hence, quite a difference compared to old full HD.

And the ones who think that films may be even better if scanned in 8K, I want to remind them that 35mm negative has, in the best case scenarios, about 4K resolution, so 8K would be useless in those cases. Sure, 70mm could take advantage from the increased resolution, but there were few movies filmed in 70mm – less than one hundred, IIRC.

But then the DCP will eventually take advantage of 8K, right? Well, if we think that most of the digital intermediate are finished in 2K, even if shot in a superior resolution, and the CGI shots are usually rendered in 2K anyway due to processing cost and time – I can’t see the switch to 8K so near, even if probably it will happen, sooner or later.

What about videogames? I must admit I’m not a videogame expert (anymore), but AFAIK there are not many games in native 8K – none for consoles, I guess – and the ones that are available need a relatively high investment in CPU and GPU. Yes, it’s possible to play native 4K that are upscaled to 8K by the GPU, but what’s the point IMHO?

You need to be right in the front of the display!

Many sits at a more reasonable distance of 1.2x the diagonal of a TV, or even more; that would be a more reasonable 7.5 ft, or 230cm, from that big 75″. Problem is, at that distance, you can perceive only a resolution equal to HD! What’s the point to but an 8K television, if at worst you can see HD resolution, or at best UHD 4K? And I dare anyone to sit so close to a such huge display, in the dark, bearing 1000+ nits of peak brightness!!!

Upscaling is not the best solution!

Some are blabbing about the fact that watching an UHD 4K source upscaled to 8K is better than watching the lower resolution version on a pixel-perfect display, due to artificial intelligence, deep learning and so on. While those could do a great job, upscaled content CAN’T be better than the content watched on a display with the same resolution. Period.

Also, the upscaling process change the content in several ways – mostly slight variations, but to someone that wants the watch the content like it was created as much as possible, an 8K display isn’t the best solution. Sure, we are watching full HD (and even SD) on UHD 4K televisions; agree, but there are a lot of UHD 4K sources to watch right here, right now, and more to come, while there is very few 8K content now, and not many is expected any time soon.

And, when 8K material will come, remember that an 8K downscaled material is, at the contrary, better than native UHD 4K mastered one; so, thanks to cheap external players, your current UHD 4K display will continue to display 8K material for much time in the future.

Local dimming is not up to the task (yet?)

Apart one example that I know, that uses something like 5000(!) dimming zones, the other 8K televisions use much less zones; they are around 1000/2000, not that bad for a FALD (Full Array Local Dimming) miniLED-backlit LCD television, still far away from the independent 33+ million individual “zoned” of an OLED.

And, if we consider that even with 2000 zones there are blooming and halo problems in an UHD 4K TV, in an 8K one with the same zones, each zone must cover 4x the number of pixels, hence even more noticeable blooming and halo…

Last but not least, the price

I know, prices are getting lower, but still higher than comparable UHD 4K display, in particular OLEDs.

So, do we need an 8K television? Personally, I don’t think so. Problem is, producers (want us to) think the contrary, so probably one day there will not be possible to buy a television with a resolution lower than 8K. But at the time, there will be 16K already, then 32K, and then…

Found this display distance calculator, where you can see the actual resolution you can actually view given the display size and the distance: https://www.homecinemaguru.com/display-resolution-calculator/