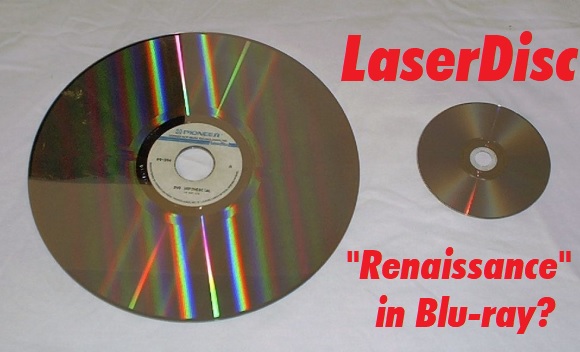 You must admit almost all, here, would be more than happy to see the laserdisc format alive, again.
New movies on a long-time dead format… and, of course, anybody knows that it will never happen – even if a Digital Laserdisc built upon BD technology will lead to a 1.2TB monster disc that could contain an entire UHD long saga as Star Wars, or few long TV series seasons on HD, or… well, a lot of things!

OK, back on Planet Earth, and on topic: would be possible to get a laserdisc “Renaissance” on Blu-ray? I think so!

Laserdisc is not (only) an analog video format (with analog and/or digital audio); it’s much more than this! It brought us a lot of innovations – widescreen, director’s cut, digital audio, multichannel audio, multi audio tracks, special editions, box sets etc. and, without it, probably DVD and BD would never have existed.

We love that physical, huge disc… that big cover (better if gatefold, perfect if within box set) with great arts, liner notes… often inserts that were not mere chapter lists, but insights of interesting facts about the movie, or the format itself…

Video wise, even if it was top notch at the times, it can’t stand HD (and UHD) formats of nowadays; still, sometimes its color timing (I guess the digital color grading was not applied on them) was similar to the one seen in the theaters (apart the obvious problems due to format and transfers); and sometimes it still has colors and/or contrast better than DVD and/or BD.

Audio wise, it’s still a great pleasure to listen to a laserdisc track; very often they used the theatrical mixes, while not all the times those mixes were used for the DVD and BD editions, in particular when we talk about mono and stereo tracks.

Said so, I don’t want to say that laserdisc is perfect, and blu-ray is a bad format, at the contrary: blu-ray is a great format itself – very good definition, lossless multichannel audio; still, sometimes, the content is not… well, “right”?

We got blu-ray editions with “wrong” colors and/or contrast, audio mixes, poor covers etc. – a format that good deserves more than this.

Now, you are asking yourself: ‘What all this has to do with a so-called laserdisc “Renaissance”‘?

Well, let me explain. We would love to get laserdisc back to life. We all know it will not be possible (unless a crazy multi-millionaire guy would do it for us, at loss, but it will not happen, probably…). Still, we can do something to bring laserdisc “spirit and/or flesh” in the blu-ray world. How?

recently, Disney, Warner and others have made a sort of analog revival, offering laserdisc/vinyl sized covers for their blu-ray and DVD – they called “Vinyl Edition” here in Italy.

They are a bit scarce in comparison to many laserdisc gatefold covers, but it’s a start! Think also that it is possible (not too easily, I must admit) to make custom jackets for our blu-ray and DVD discs – like this, for example: https://johnpurlia.wordpress.com/2013/01/28/diy-record-album-covers/ – and a guy even made ones for his laserdiscs! http://www.aheroneverdies.com/… [archived]

laserdisc is only standard definition, but in few rare cases it is the only (or the best) version available – as for title availability, or for its cut, or for the aspect ratio – for a given title; of course, this could be captured and placed onto a simple DVD; but blu-ray offers, apart the standard resolution compatibility, also the chance to use AVC instead MPEG-2, to get better quality at the same bitrate, and other improvements; also, it’s possible to upscale the video to 720p/1080p, not to increase actual resolution (that is not there), but to get proper 24fps (23.976fps), in case you have PAL movies, or want to avoid possible interlacing problems. Or, if you want to just add scenes/shots (or even single frames) that are not present (or are censored) in the BD version.

But the previous case is not so common; more common (even if still rare in general) is that laserdisc colors *could* be better than the ones found on blu-ray – because quite some laserdisc titles used release or interpositive prints as color reference, while it’s widely known that blu-ray use usually negative print (to get better resolution), and then try to color regrade it digitally to get colors as close as possible to release print (that were 20, 30, 40 years older than laserdisc master) – or, simply put, they regrade it to be more “modern” (teal & orange, anyone?).
In this case, laserdisc could be used as color reference to regrade the blu-ray; of course, it will be close to impossible to get the same identical colors (and, as written before, probably the laserdisc colors aren’t perfect, and should need some color correction), but with the proper tools and skill it’s possible to retain most, if not all, of the “laserdisc spirit”.

Example – Waterworld (top WEB, middle LD, bottom HD regraded as laserdisc) (crop frame):
Link to full screen comparison (#ff0000;">WARNING: NSFW, but the movie was PG-13, so I guess it’s OK to post a link to it; Julien, feel free to remove it if it’s not appropriate): http://ultimateaspectratio.ga/UAR_compa … vs_FC.html

Now, take in account that WEB version basically shares the same color grading as HD-DVD, blu-ray and DVD, even if it’s not perfectly the same, but we are there; and the regrading is not 100% faithful to the laserdisc color (also because I tried to remove the slight magenta blanket) – I’d say 95% up to 99%, depending on the scene, but it perfectly retains it spirit, color and contrast wise.
Also, I didn’t watch the movie in theaters at the time, but I have it in both NTSC, DS and DTS, and PAL Italian, and I distinctly remember the reviews about how good the transfer was – one said “colors are theatrical accurate”; can’t vouch for this, of course, but *maybe* the reviewer watched the movie in theater few months earliers, and his memory was relatively fresh – surely more, in comparison, than the one of the author of a recent blu-ray review, that probably did watch the movie (if it’s the case) in theater 15, 20 years early…
Indeed, I was quite disappointed when I bought the DVD, to discover that its colors was not as good as the laserdisc – as well as the HD-DVD – but a lot more muted, dull, with a lot of magenta in the sky and/or water – and, in a movie like this, there is A LOT of shots with water and/or sky!
Despite the fact we can’t say for sure if the laserdisc colors are more theatrically accurate than blu-ray, I can’t think the latter has better colors than the former… do you agree?

it seems that almost all laserdisc mixes are the original, untouched theatrical ones – for convenience, lazyness, or else; Cinema DTS audio tracks, which were compared directly, are almost always identical to the LD DTS, apart the fact that obviously the former lack the LFE channel; some DVD editions may have imported them from LD, untouched – keep an eye at earlier 384kbps AC-3; but DTS track was almost always half bitrate on DVD (while full bitrate on LD) and often AC-3 tracks were “lighter” than the ones found on LD, in particular when the original tracks were matrixed surround, and the AC-3 were mere 192kbps…
Also, in many cases blu-ray uses remixed versions, or reconstructed ones – like upmixing original mono to 5.1 – and often does not offer the original track – sometime you can see a 1.0 in the audio track list, but it’s not a guarantee it’s the original one, and not simply a folddown of the remixed one…
Add to this the fact there are many commentaries and isolated score and/or effect tracks exclusive to laserdisc!

So, you can get the laserdisc audio and mux it with the blu-ray video (“vanilla”, or regraded as laserdisc, to get the complete experience). Do note that it’s possible to capture digital audio bit-perfect, even if PCM and DTS should be converted from 44.1KHz to 48KHz to be DVD/BD compliant, while AC-3 will remain untouched! Usually it is preferred, when both PCM and analog tracks have the same content, to capture only the PCM; but if the Japanese chose to use the analog tracks for their own language, instead PCM, there will be a reason… (more info about this in my post “Why laserdisc soundtracks are better…” here: https://forum.fanres.com/thread-1107.html)

At the end, you could get the best of both world: blu-ray superior definition, excellent compression codecs that avoid (almost always) all that nasty artefacts seen on DVD, along with laserdisc content (in rare cases) or color grading/contrast (more common) and untouched (with AC-3 tracks) or almost untouched (DTS/PCM tracks) or very good (analog tracks) audio, packaged in a laserdisc sized cover that reminds the original ones.

Of course, this could be applied only to movies up to year 2000, and only some would be eligible to get a “laserdisc Reinessance treatment”, but this will be rewarding, I think!