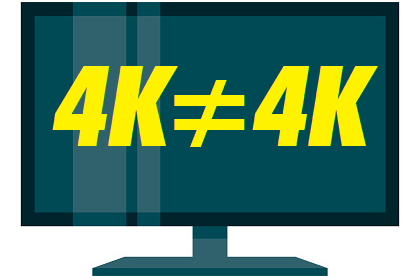 What does it mean? Well, I guess anybody know what K stands for

Kilo is a decimal unit prefix in the metric system denoting multiplication by one thousand (103). It is used in the International System of Units, where it has the symbol k, in lower case.

So, what does 4K mean? It should simply mean 4000 – or four thousand. But when referring to video, it should refer to 4000 pixels of horizontal resolution – where 2K should refer to 2000 pixels, 8K to 8000 pixels and so on; the article took in account only 4K, as 2K has not the same strenght as buzzword, and still too early to broadly talk about 8K; still, they are involved, too.

Let’s go back to the “old” high definition times; there were two main resolutions, 1280×720 and 1920×1080; both defined as HD, but to make a distinction between them, the latter was usually called Full High Definition, or simply FHD. The UHD, meaning Ultra High Definition, takes the High Definition to the next level; it actually refers (again) not to one single resolution, but two: 3840×2160 and 7680×4320 (four and sixteen times FHD resolution).

So, why should someone care about this, where 4K UHD is everywhere – UltraHD Blu-ray, web, UHD TV etc. and DCI 4K is not present in our homes? Well, to be honest, there are (very few) DCI 4K projectors available for home use – namely JVC, Sony and few others – along with very expensive monitors; but yes, they are in vast minority.

Still, I fight for the rights of the minorities; if you are like me, please start to call 4K UHD as it, and not simply 4K – because every time someone writes 4K to mean 2160p, a filmmaker out there starts to cry…